After extended loans from our local toy library of pretend fruit and vegetables, I made a couple of bargain purchases - a little cooking set and some toy food. ...Best investment ever.
Seriously - this lad cooks from the minute he wakes (waddling out from his bedroom still in his sleeping bag)  - to the minute before we read his bedtime stories!
So with a rare 45 minutes before mum's group one day, I decided to channel my inner "Play School" from years ago, and whip together a little stove/cooker. (After all, I was not able to justify paying for a cute ready made kitchen unit).
To say that this toy has been a hit is an understatement. It has been an absolute favourite since I made it (when he was around 15 months) and 2 months on it continues to be a favourite.
Admittedly, 2 weeks of that I confiscated the unit as I was concerned it was becoming a real obsession and wanted to encourage him to explore other things to do!! 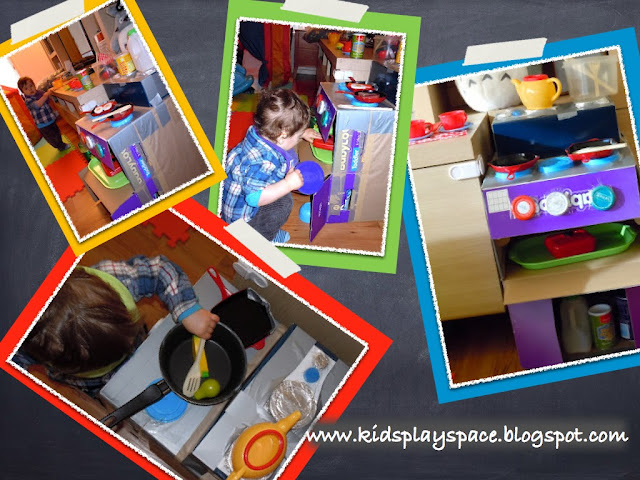 Post note:
If you'd like to see how we 'refurbished' this stove/cooker over a year on, (as it remains a favourite play space in our home), check out our DIY Stove/Coooker 2.0
Thanks for visiting Kids' Play Space!
Happy Playing!
'til soon,
Anna