OK, so this one was/is a tad time consuming - not sure what got into me... but I think the end result has good potential!! 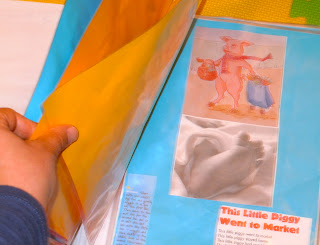 PART 1: Selected the songs (work in progress... !!!), created a page for each song with a large clear picture I felt best represented the song, popped them in separate plastic pockets, collated them in a binder/folder.
PART 2: Created a customised CD & ipod playlist of favourite songs (which happened to otherwise be spread across a number of different discs, causing great annoyance to me switching all over the place & provided too many opportunities for little Mr Music to lose interest & get distracted!!)*

I wanted to create a song book for my 16 month old, of his favourite songs and rhymes, where the pictures were simple, clear and dominant (not a token symbol, if anything, beside a page of lyrics). I thought we could do lots of pointing at the pictures (and different parts within each picture) when choosing a song to sing, and also during the songs themselves. I am yet to really give this idea a really red hot go. I think it could be good to use with the pages in the folder, but also pulling a few out at a time to choose between. 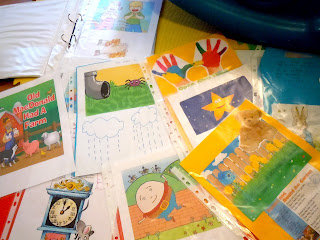 I like the idea of him sometimes having a bit more control over which songs we sing, rather than just going along with whatever is played. Who knows, I could be COMPLETELY naiive, but maybe, as he grows in confidence and ability with his stereo/ipod operating skills, I can use this folder to redirect his sense of control!!??
* I say "created" ... it's a work in progress;-)

Note: Today he found the folder, opened to the page with the 2 colourful hands and started doing the actions to "Open, Shut Them" :-)
Labels: 1-2 years Toddler free music