On a cool wintery Sunday, alongside some steaming vegie soup - what could be more yummy than some freshly baked damper, with a little butter, or maybe jam... Mmmm.... Now to dampen the mood a bit - apologies...

We survived 20 months until our first family gastro experience - a good run I think (...oops, sorry 'bout that!) It's not fun. It's pretty much the opposite of fun - you just wish the hours away until everyone is well again. Unfortunately, there is only a limited amount of rest time allowed to be taken by the HROEC (Home Rehabilitation Activities and Entertainment Coordinator). The whines of restlessness and irritability - from hunger, generally being unwell, and 'trapped' indoors, with only each other for company, inevitably show themselves! ... and that's when we decided to make some good old Aussie DAMPER!

We didn't use a recipe - just poured self raising flour into a large mixing bowl, and slowly added water, and a good pinch of salt - until it formed a decent dough. Being a cooking activity, our little chef was back in his element. There came a point when the dough needed to be split into his and ours. Ours was quickly thrown into the oven, while his was, shall I say - a tad over worked!! He had fun though, stretching, rolling, flattening the dough and generally immersing himself nicely in some sensory time.

Then, he watched some little damper rolls rise in the oven, and finally ate some... with a touch of Vegemite, of course! 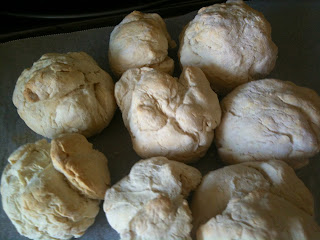 For some proper,  fair dinkum Aussie Damper recipes, you could try these links:
Taste
Best recipes
All down under