Let's face it, it's hard in this day and age to resist the onslaught of TV, movies, commercials and the multitude of screen-devices. Then there's the enormous piles of cheaply made 'plastic fantastic' toys, and easily mastered, highly repetitive, (and often mind gratingly annoying) battery operated toys!

And before long, as the toys accumulate and threaten to take over, you feel like you are living in your own life-sized claw machine. You start looking above your head for one of those moving claws bobbing about threatening to grab a prize for the kid staring hopefully in through your living room window who's just gambled a dollar of his pocket money!
Which got me thinking about how it might be possible to 'strip down' our kids' play spaces a bit to focus on how 'less' can be 'more'...
While all toys have their place, I admit to being a big fan of:
Tackling screen-time is a whole other ball game. There has never been greater urgency for us, as parents and educators, to look closely at kids and screens. I got curious, and found out a few facts worth considering ...
Did you know…
“on average, preschool children spend
32 hours a week with screen media” ?
Follow the link in the title to another great fact sheet from the Government of South Australia/ SA Health: “Give the screen a rest, active play is best”
Australian Guidelines for screen time:
According to The Mayo Clinic, too much screen time (over 2 hours per day of TV/ computer use/ video gaming) has been linked to
The Campaign for a Commercial Free Childhood - reclaiming Childhood From Corporate Marketers have a fantastic fact sheet: here ). Some of the benefits they list of reduced screen time include: 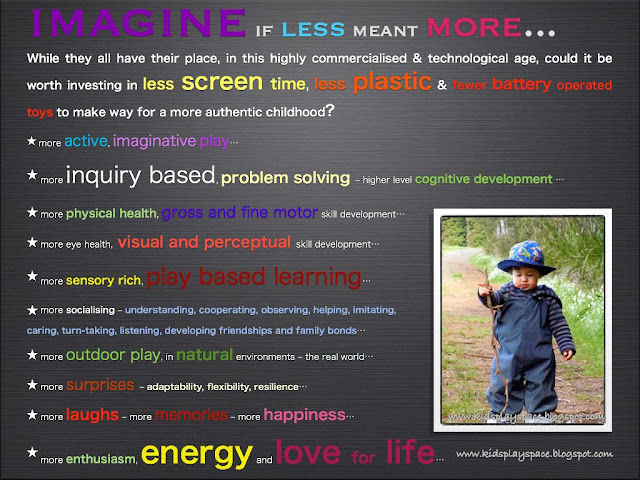 Medline Plus, an American national health information site, highlights that screen time is sedentary, requiring little energy exertion.  It lists some great practical ideas to encourage less screen time as follows:
So, whilst we managed to survive the first two years of our little one’s life, essentially television-free (whilst he was awake, at least!), I am acutely aware that the biggest challenges around limiting screen time are ahead of us.

Some ideas we try to stick to, and good ideas I've heard from friends with older kids include:
On a lighter note, keen to stay committed to our ‘no TV for or in front of baby’ rule, here’s a little structure we built one afternoon to obscure our little munchkin from the TV screen we turned on in desperation- sleep deprived, with low to non-existent energy levels, not able to bring ourselves to do anything else on a cold Winter’s afternoon… TV-less baby play space 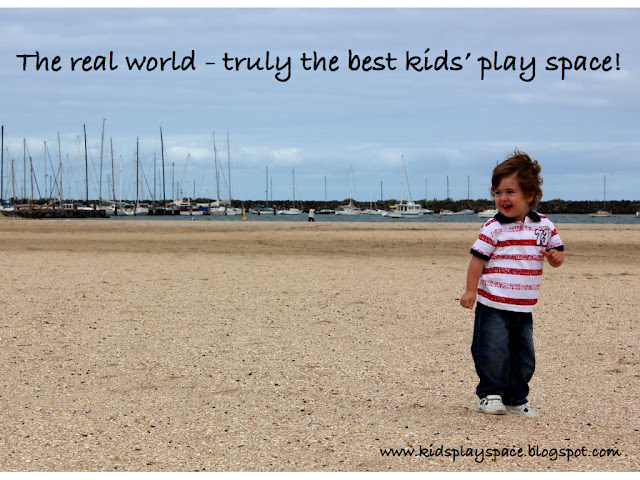 Follow the link to see a great list compiled by Childhood 101 of 9 ways to motivate children here, which highlights reducing screen time.
I would love to hear from others as to what strategies, routines, ideas you’ve tried to keep a lid on TV and other screen time activities in your house!
"Here's to creating more from less"... Imagine that!!!