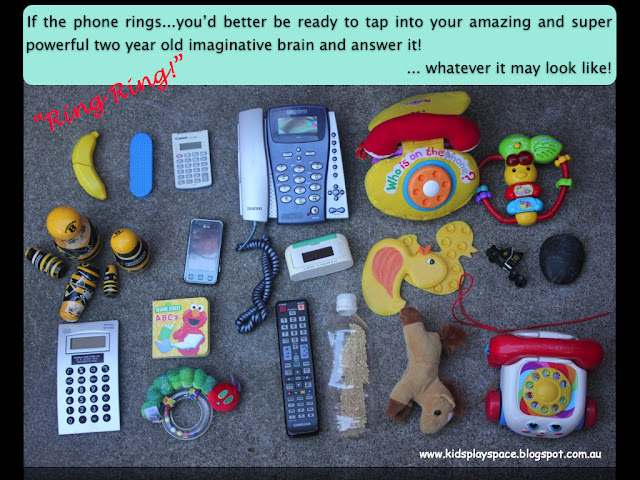 Of course, this selection of ‘phones’ is by no means comprehensive – I could have easily
added spoons, cups, sticks, leaves, and nappy cream among many others! It is just a random
collection, gathered quickly, in an attempt to capture this cute (yet important) moment in
Master B’s play development – symbolic play. And it seems that using all sorts of objects as
phones seems to be his most popular symbolic play choice by far!
My personal favourites include:
1. the spontaneous pulling apart of our alphabet foam floor tiles to specifically get at the blue
piece from the centre of the 'O' for a quick chat; and
2. taking an urgent call in the bath by ripping up a rubber duckie suction grip piece!!
Play-acting draws on a child’s memory of familiar experiences and scenarios, giving them
opportunities to remember what they have seen, practise language and actions appropriate for
the context and exercise their imagination.
I’m not sure what this says about me, or what my child thinks about me, but soon after
we made our little cardboard box stove top/cooker (see post here), he was caught busily
multitasking …working the frypan on the stove, then stirring another pot at the other
end of the bookshelves, and racing back to the frypan – all one handed, whilst having
an intense conversation on the phone in the other hand! *Mental note: I must not race about simultaneously cooking and making calls all the time!
Master 2 has often also just used his hand, or held an invisible (rather than non-existent)
phone. Curiously (and imaginatively), it's sometimes tiring holding the 'phone' to one ear or
with one hand only, particularly on long car journeys - so it's swapped between hands! … I
know how he feels.
We’ve entered into our little boy’s wonderful world of telephone calls many times too: role
playing, practising words, and reinforcing routines (“hello nana? ... yes, he’s been so busy
playing all day and now it’s time for a bath!! ... see you later!”)…
Almost daily though, he makes at least one call – sometimes several, to his little cousin, who
is only 3 months older, and who lives overseas, on the other side of the world. It’s great that
he knows her, thinks of her, and involves her in his play, even if it’s imaginary, but I still
wish we lived closer! Thankfully, they get ‘face-to-face’ time with Skype or Facetime nearly
weekly, where they can talk about what they’ve been doing, sing songs, read books and
even have dinner/breakfast together - virtually!
I’d love to hear how your littlies may have surprised you, using an object for something other
than its actual purpose!
If you are interested in imaginative play, you may like to check out these other home based, indoor play ideas from Kids’ Play Space:
Cardboard Box Train
Vacuuming - kids' style